It's all about the Author with C. Lee McKenzie 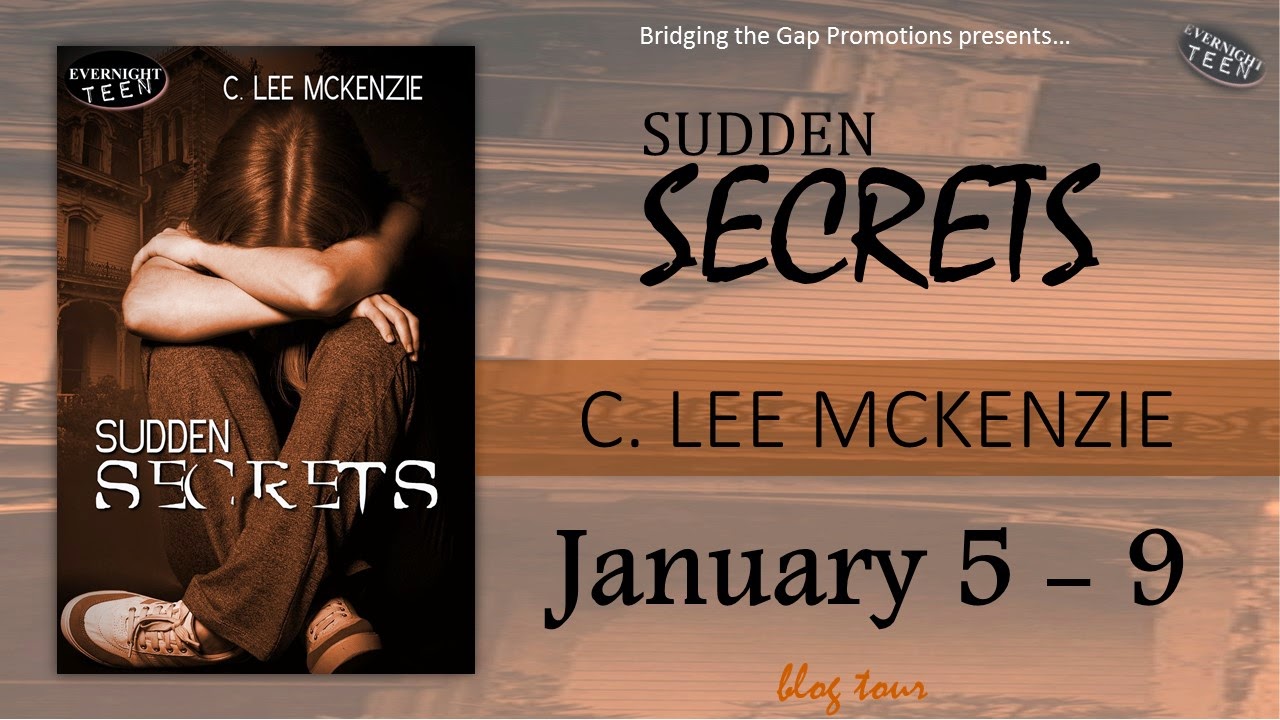 It’s All About the Author…

1) Please tell us 5 interesting facts about yourself that readers might not know about you …
I’m borderline OCD. I don’t think anyone but my family knew that until now.
I’m a princess when it comes to my bed. Sheets must be ironed. Yes. Ironed.
I once was an actress and on my way to New York, when I met my husband and made a choice —him not New York.
My biggest fear is snakes. Give me a room of spiders any day.
I’m not superstitious until Friday the Thirteenth, then I’m totally a Triskaidecaphobic!

3) Is there one book that you love to read over and over again?  If so, what is it and what is it that keeps you coming back to it?
The only book I’ve re-read several times is Alice in Wonderland, and that’s because I read it to my kids and a passel of nieces and nephews.

4) How did you get started writing and have you always wanted to be an author?
I read an article about “cutting” and I couldn’t understand why young people would intentionally hurt themselves. I set out to find the answer, planning to write an article. It wound up as a fictional account in Sliding on the Edge. That’s how I began. When the publisher asked what I had for them next, I came up with book two, The Princess of Las Pulgas. I was on that slippery slope, so there was no stopping.

5) If you for some reason couldn’t be an author, what would your other choice be?
I’d be a white water river guide. I love to run rivers, and that job would let me do it a lot.

6) Did you like school?  Were you a good student?
I liked some classes. English (no surprise there), but I also loved geometry (go figure). I got A’s in those classes, but algebra? Absolutely hated that. I think I scraped through that with a C-.

7)   When you write, is there a specific way you have to write, ie:  certain room, noise or quiet, computer or paper etc…
All I need is a quiet space. I don’t care what I write with, but I do most of my writing on the computer.

8)  If you could write a collaboration with another author, do you have one in mind and what would you write?
I’d love to write with another author. I envy those writing teams I read about. Kami Garcia is a sweetheart, and she writes great stories, so I’d choose her to team with.

9)   How do you come up with your story ideas?
*Scratches head.* If I knew the answer to this one, I’d be so happy. The honest answer is just about everywhere, anytime. The stories usually surprise me, like cats that jump from behind the couch.

10)             Do titles stump you or do they come easy?  When do you pick a title, before the story is written or when it’s done?
I’m all over the place with titling. And I’ve learned that even if I think I have the greatest title in the world, publishers might not agree. My first book I titled Bad Ass Attitude, but the publisher thought it was too “raw.” They changed it to Sliding on the Edge.

11)             Do you keep a notebook near you for when new ideas pop into your head?
I write notes just about everywhere on anything. I have a pile of ticket stubs, cash receipts, bank deposit slips with notes on them. I do have notebooks, and I use them up quickly. I never know what I can use or when I’ll use it, but I’m pretty compulsive about those notes.

13) How does your family feel about your writing?
They’re supportive. They don’t understand how this all     started and often ask me why I do it. I still don’t have  an answer for that.

Thanks for hosting me today! Really enjoyed answering your questions. Hope I did okay.

Thanks for sharing “you as an author” with us !  You did a great job and we hope you’ll come back and visit again soon! 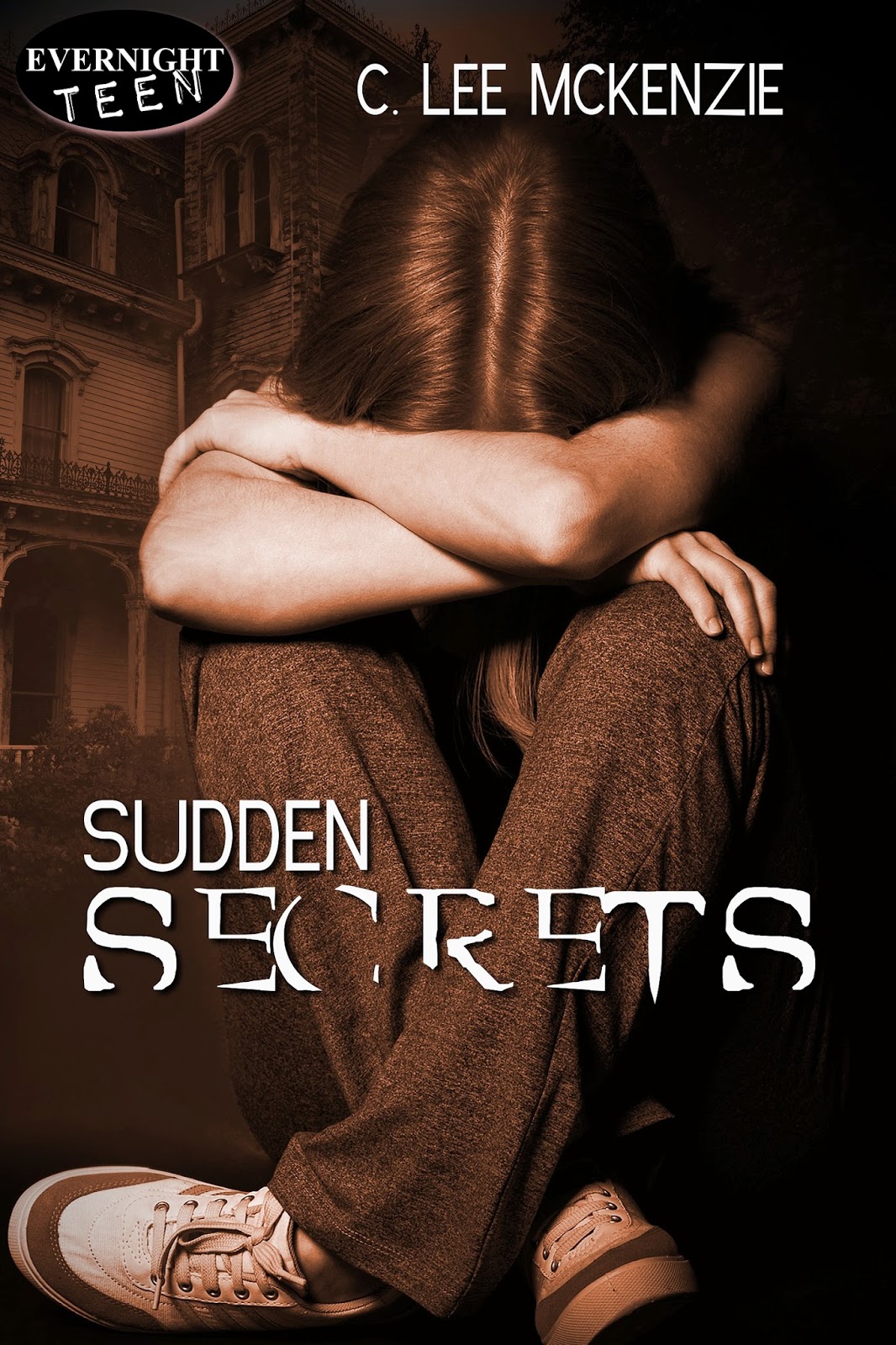 Cleo has struggled to heal after her baby sister’s death, but the flashbacks to the accident won’t go away. With the move, she vows to keep her tragedy a secret and avoid pitying looks.

Something’s strange about the abandoned house across the street—flashes of light late at night and small flickers of movement that only someone looking for them would see.
Everyone says the house is deserted, but Cleo is sure it isn’t, and she’s sure whoever is inside is watching her.

In one night, Belleza’s life changes forever. So famous, her only choice is to hide her secret from the world so she can silence small town bigotry.
Then Cleo happens.

14+ due to adult situations

Excerpt:
It had been a terrible and very long journey from that tragic Christmas to now, and I couldn’t think about losing another one of us. We’d each done all we could to live without Aziza.
Dad went as far away as possible from where the accident happened. Mom sold our    house and moved us to a new town. Still, we weren’t over that December day.
Mom buried herself in her work for long hours.
Grandpa pulled into himself, wearing that glazed look he’d adopted before the funeral.
I was almost sure he’d wear that look for the rest of his life. He loved Aziza. And what wasn’t there to love? Beautiful golden girl, my mom called her, forever poking her four-year-old nose around the corner daring any of us to chase her. Teasing, begging for attention, which we gave because we couldn’t resist her…
Grandpa loved my sister a lot. I was afraid he loved me very little now.
I wasn’t so fond of myself, either. I shut out all of my Buena Vista friends and started running alone.
From the window over the kitchen sink I watched Nefertiti as she sat on the step, preening in a sunny spot around the back of the house. I went out to sit with her, stroking her fur and surveying the weedy backyard that Mom hadn’t had time to think about. She kept saying she planned to hire a gardener, but there was always something that derailed that plan. In September, it was the new show at the museum that she had to set up by October. She was in charge of staging the Egyptian pieces coming on loan, but she was shorthanded and putting in extra time to make up for only having two assistants. It was going to be a while before the toilet and other debris disappeared.
It was all too depressing to look at, so I walked around to the front and for a minute glanced at the windows of the house across the street. I almost expected to see someone staring out at me. I couldn’t shake the creeped out feeling I got every time I looked at that place.
I knelt to check my laces, and then I was racing down the street, hoping to shed old fears, old thoughts . . . at least for a while. I was at the end of the block, deciding which way to turn, when I spotted Grandpa. I went in the opposite direction, so neither one of us had to pretend that everything was all right since that letter from Dad.
The high school was only four blocks away––one of the reasons, Mom said, she chose this location. It also had one of the best academic ratings in the valley. Another reason she told me she zeroed in on our cozy cul-de-sac.
When I reached the school, I stared up at the two-storied building where I’d spend my last two years of high school. Then what? Junior college, or a job at K-Mart? I worried that I’d bomb on my SAT’s.  I’d bombed on almost everything, hadn’t I? My grades, my friends––being a sister.
I walked up the stone path, leading to the main doors, imagining that first day here, my stomach balling up with worry just on the edge of dread. That first day was going to be the worst.
Off to my right, a thick oak sheltered tables with benches, so I jogged across the lawn and sat on the wooden slats and thought about how it was going to be when school started. Everything new. Everything different. The stares all newbies get. Nobody would know who I was or why I was here. They wouldn’t know my mom was famous for her books on Egypt, or that my dad was an archeologist—the one people called when they dug up important ancientanything in the Middle East. But they’d know something was different about me the minute they heard my name. Cleopatra wasn’t on any baby name list they’d ever read. Neither was Aziza, but she was too little for her name to embarrass her. She’d only just learned what it meant. Precious. And she was that. She was.
A breeze brushed my cheek and I shivered. I thought I’d gotten over feeling that chill, but the healing process wasn’t just slow, it was uneven, too. Sometimes Aziza was only a whisper inside me, and then her image would spring from around the corner just like she used to, full of mischief and giggles. Then there would be that moment when the memory of the chilled air of our old entryway blasted across my face.
Stop it.
I jumped to my feet and jogged to the track behind the high school as fast as I could. I didn’t have a devil at my back, but I had a tiny ghost that shadowed me when I stayed still for very long.

About the Author:
C. Lee McKenzie is a native Californian who grew up in a lot of different places; then landed in the Santa Cruz Mountains where she lives with her family and miscellaneous pets—usually strays that find her rather than the other way around. She writes most of the time, gardens and hikes and does yoga a lot, and then travels whenever she can. Her favorite destinations are Turkey and Nicaragua, but because she had family in England, Switzerland, and Spain she goes there when she can.
She takes on modern issues that today's teens face in their daily lives. Her first young adult novel, Sliding on the Edge, which dealt with cutting and suicide was published in 2009. Her second, titled The Princess of Las Pulgas, dealing with a family who loses everything and must rebuild their lives came out in 2010. She just published her first middle grade novel titled Alligators Overhead.


a Rafflecopter giveaway
Posted by Krista Ames at 8:06 AM