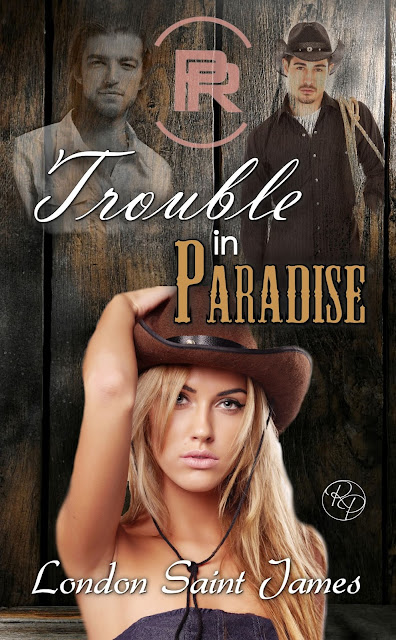 If you know what’s good for you, you’ll go back to Dallas.

Since coming home Sutton has inherited herself a heap of headaches, two bossy men who want her for their own, threatening notes, and a whole lot of trouble in Paradise.

Having Doc McNab as competition, being ten years Sutton’s senior, and under her employ, meant the deck was stacked against Flint Palmer when it came to winning the sexy, vivacious Sutton as his woman. No way would she be interested in an old, worn-out, ex-rodeo cowboy like him, but that wasn’t going to stop the man from trying.

With the exception of the pretty as a picture, Sutton Callaway, Kale McNab’s childhood sucked. He’d been jerked up more so than raised by his ex-convict of a father, eventually leaving the girl and West Texas behind. Now, he’s all grown and back in Sutton’s life, willing to do whatever it takes to stay there.

After propping up the hood, Sutton stood on her tip toes, waved a hand about in an effort to keep the smoke from her face, and glanced at the guts of the truck—as if she would know what she was looking for. She supposed the doing made her feel as if she were taking proactive measures about the situation, until the coughing started. Perhaps sticking her head beneath the hood hadn’t been the best idea.

Covering her nose with one hand, still swiping the foul air with the other, she took a step back. The breeze kicked up and blew another puff of nasty at her. She coughed yet again and stomped a booted foot on the pavement, irritated.


* * * *
Kale’s morning had royally sucked. He hated when he had to put down an animal, and as a result, he’d pretty much been in a mood when Flint called him about Maeflower. He sure hoped he didn’t have to put two horses down in the same day, a fact he’d been grumbling about under his breath when he jumped in his truck. But after leaving his office and driving down Main Street, he saw something with the potential to vastly improve his afternoon.

The corner’s of Kale’s mouth turned up into a smile as he pulled his F-150 dual cab into the parking lot of Dunning’s, watching Sutton Callaway doing the hippy, hippy, shake in tight daisy dukes, a faded turquoise T-shirt, and turquoise cowgirl boots.

What people are saying about Trouble in Paradise:

"Holy hell in a hand basket! Whoo! What a twisting turning, one hell of a cliff hanger, roller coaster ride that was. Oh, I also forgot the not one, but two hot Alpha males, hot kinky sex, and spankings. This not one of those books you want to miss. It's literally got it all!" - Goodreads 5* Review

"5 sexy stars!! Whoo I may need to be hosed down after reading this sexy, sexy book!!" - Goodreads Review


Open only to those who can legally enter, receive and use an Amazon.com Gift Code.  No purchase necessary, but you must be 18 or older to enter. The winner will be chosen by rafflecopter, and announced on the widget. Winner will be notified by emailed and have 48 hours to respond or a new winner will be chosen. The number of entries received determines the odds of winning. Giveaway was organized by Roane Publishing's marketing department.
Posted by Krista Ames at 1:00 AM