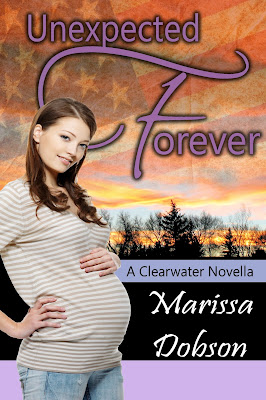 The stick turned blue and Tessa Bradley’s world fell apart. But unplanned turns out to be the best thing that ever happened to her. Add a marriage of convenience to her best friend and unplanned just might give her the happily every after with the man she’s always loved.
Deployment…
Gunny Cameron White devoted his life to God, country and the Corp. Marriage has never been a blip on his radar. When his best friend—a woman he’s always loved—turns up pregnant and alone, he throws out the rule book and commits to her like a Marine.
Marriage…
Can two people overcome the choices of their past when an unplanned baby gives them the chance of an unexpected forever?

Hmmm, how to start this review...I loved it, what a fantastic book, it made me cry more than once... I could go on and on.

Seriously though, all of Marissa Dobson's books I have read have been great and this one didn't disappoint at all.

I have a thing for military guys :) and I loved Cameron literally from the very beginning.  He was one of those best friend kinda guys that you just wanna fall for.

This was a fantastic story with characters I felt like I knew so well.  They were descriptively well rounded and had an unbelievable amount of heart.  I swear my husband probably thought I was nuts when he saw me crying but I just couldn't help it.  Their real  situations were portrayed in such a way that I felt the joys and the heartaches right along with Cameron & Tessa.

I'm ready for a trip to Clearwater myself :)   Do yourself a favor and get this book, you won't be sorry !