Review: Wolf at the Door by Sofia Grey 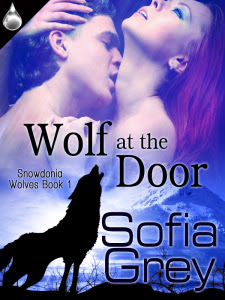 Wolf at the Door
Snowdonia Wolves # 1

Love can heal all wounds...
Pop star Lillian Hart is determined never to trust another man. She has no idea that the wolf at her door is anything other than a wounded dog, much less the Alpha of the Snowdonia Wolf pack. There's something about the wild creature that pulls at her. Then a man with her wolf's eyes starts to invade her dreams, and reality and fantasy merge in a way that has her hoping, against all odds, for dreams to come true.

Lillian may have sworn off men, but Jake's not just any man, he's a shifter, and he's about to shift Lillian's world to make room for him. He vows to claim her as his Mate, and when Jake makes a vow, he keeps it. But Lillian wants to take it slow and Jake is not about to waste any time.

In this battle of wills, both discover giving in and trusting their hearts can heal even the deepest of hurts.

When I was first asked to read and review this book, I was game because it was a paranormal. Then I saw the cover, realized it would be a wolf book and I got super excited. I love paranormal/shifter wolves and romance. :)


It was later in the evening when I decided to start it to see how far I could get. Well by 1 a.m., I could barely keep my eyes open but was so torn because I seriously could not put this book down.


Congrats to you Sofia Grey, for writing a fantastic shifter story !!!!!


I love love loved it :) At 87 pages, it was the perfect length for me to read at one time but then at the same time it just wasn't long enough either because I didn't want the story to end.


I have to say I fell in love with Wolfie before the end of Chapter 1 :) His protectiveness was immediate for who he recognized to be his Mate and was impressed that he had respect enough to give her a little time to get used to him before he scared the crap out of her. And how cool to have the ability to invade someone's dreams? That was a trait I hadn't read in any books before so I really enjoyed that. I won't give you any more details though so you can experience it for yourself.